Alan Martin Alan has been writing about science, tech, games and politics for a decade, with a period in game production in the middle.He has a special soft spot for the Internet of Things, healthcare, psychology and fitness trackers – despite most of them offering the same critique: he’s not fit enough. Alan is also the only person you’ll find in the Venn diagram of “people who’ve written for Nuts” and “people who’ve written for the New Statesman”. Read more October 21, 2016

I’ve been living with the TomTom Touch for nine days. Over that time, it has completely run out of battery, without any kind of warning, on three separate occasions. The official site promises “up to seven days of tracking before needing a recharge”, which I suppose is still true, given that  you might be able to achieve that if you turn off the heart rate monitor, but it doesn’t exactly feel in the spirit of the promise.

It’s quite telling, however, that the poor battery life isn’t my biggest beef with the TomTom Touch. In fact, it only just scrapes into the top three. The TomTom Touch is a fitness tracker that I will be all too happy to see leave my wrist for the last time once this review is filed. Read on to find out why.

READ NEXT: The best smartphones of 2016

Things get off to a reasonable start: on the wrist, the TomTom Touch looks stylish enough: an all black (in our case) wristband, with a hard plastic frame designed to keep the fitness tracker part in place. Pop the tracker out and it looks a little flimsy, but that’s beside the point. It looks fine when in use. It’s not the most comfortable to wear, with the rubber strap rubbing a little uncomfortably with extended use, but it’s easy enough to loosen should your wrist need a little break.

The unit itself, once removed from the strap, feels similar to the Fitbit Alta, although with rounded edges. TomTom boasts of its super slim design, and for the record, that translates as a depth of 11.4mm which is pretty thin, but somehow it feels chunky on the wrist. The 5 x 22mm monochrome OLED display has a resolution of 128 x 32 pixels, meaning the icons on screen are a little grainy, but that’s no worse than any other dedicated fitness tracker.

Let me I pause at this point to give the TomTom Touch a little positive feedback: it charges via micro USB. Hallelujah! I can’t be the only person in the world fed up with every company deciding its unique and special snowflake of a wearable needs its own proprietary charging cable. Well done, TomTom.

The other notable part of the design is the TomTom’s single circular silver touch-plate, which sits at the bottom of the screen. Dab a finger to this and the tracker springs to life. Why is this not a physical button? Well, it’s the device’s main selling point: hold your finger on it for an extended time and it will give you a snapshot of your fat and muscle mass percentages.

Let’s start with that fat/muscle calculator. It does this, like certain smart scales, by passing a small current through your body and measuring how long it takes to come back. This is what is known as a bioelectrical impedance analysis, and although the technology has improved in recent years, TomTom itself acknowledges it’s far from perfect, warning that it “may fluctuate during the day”, so it’s best to keep your measurements to the same time every day, and ensure you’re properly hydrated.

It doesn’t work 100% of the time, which is irritating when it takes 15 seconds a try,  but once I’d got the hang of lining up my finger just so, I found the rate of failure dropped significantly. What’s more annoying is the fact that the Touch doesn’t actually tell you your results on the screen. You have to turn to the smartphone app instead and wait for it to sync.

I can’t really speak for the muscle percentage accuracy, either. The Touch seemed to think I was around a third fatter than the last time I weighed myself with smart scales – a stat that’s depressing as it is plausible – but it seems reasonably consistent with itself, fluctuating by around 4% over the course of a week while. I imagine that it could provide another useful metric along the way to weight loss, albeit one where you shouldn’t expect to see sudden changes.

What I don’t like is that the touch plate is the only button the TomTom Touch has, and it isn’t a particularly good one at that. You can navigate with the touchscreen by swiping up and down, but you can’t trigger anything with it. That’s done by tapping the touch plate, which, of course doesn’t offer any kind of resistance or physical feedback. The band vibrates occasionally – to tell you you’ve started and finished a workout – but it’s inconsistent. It doesn’t buzz to tell you you’ve taken a heart rate reading or a body fat/muscle composition reading, and it doesn’t buzz just to tell you you’ve pressed it correctly either.

I’m not impressed with the amount of information displayed on the screen, either, especially while exercising. For example, you can cycle through time run for, calories burned and heart rate, but that’s all. It isn’t far removed from the stats available without fitness mode switched on.

And the fact that the app seemed to have recorded every single instance of exercise as “gym” with no distance given, even when backdated to “running” made me wonder whether I was using it wrong. Upon consulting the manual, however, it does look like this is actually how it’s intended to behave. There physically isn’t a way to select what kind of exercise you’re doing on the band, so it’ll just assume you’re gyming and won’t guess at distance traveled. 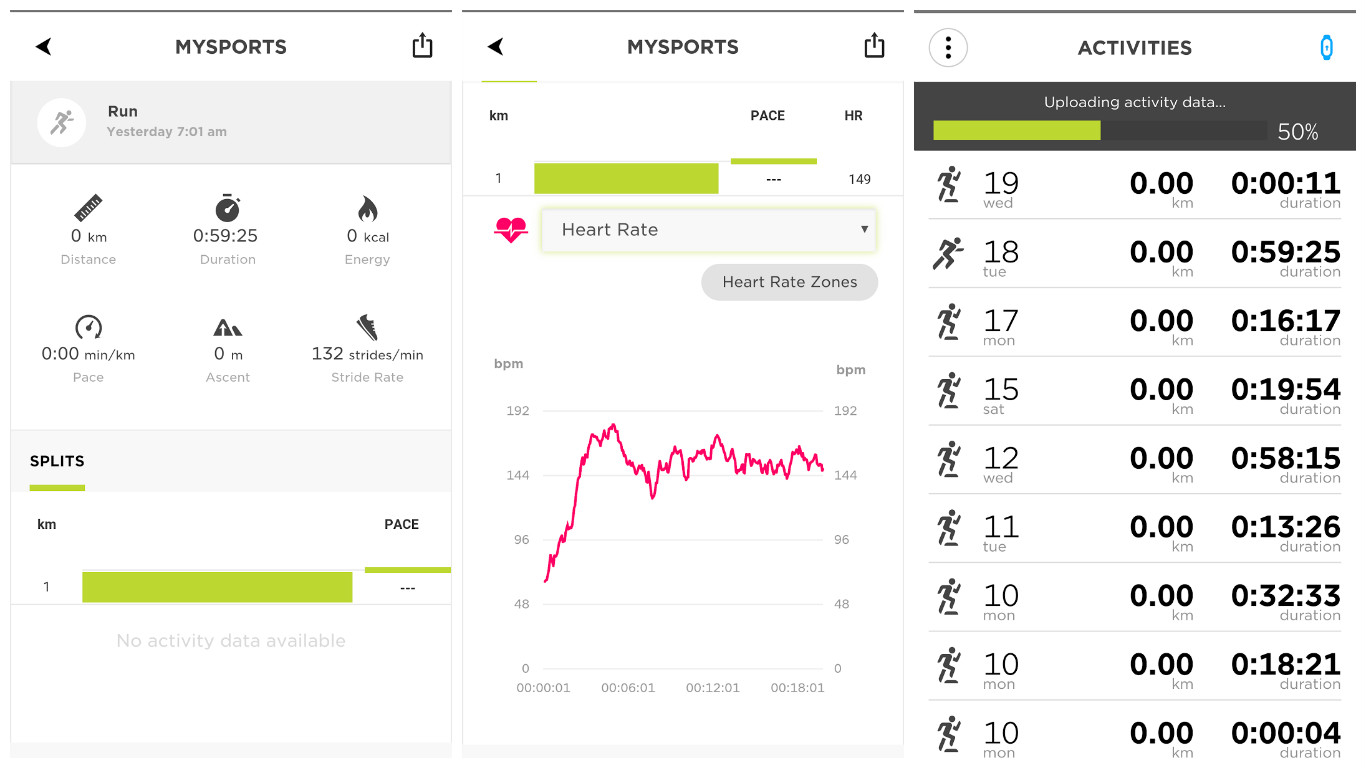 On the subject of “things I had to look up because I couldn’t quite believe it”, I did for a time wonder if the TomTom Touch had a secret GPS unit built in – how else could it possibly justify the lousy battery life?

Nope, no GPS. I’ve had the TomTom Touch since 10 October. Nine days later I’ve found it completely flat three times. That’s bad in itself but what’s worse is that it doesn’t give you a great deal of warning. While the Fitbit will actually email you to tell you the device needs charging, the TomTom will give a brief low battery icon when you tap on it to check-in, but if you don’t look in the last 20% or so of its life, you won’t know it needs a charge until you find it completely unresponsive.

It’s a shame, because otherwise, the TomTom MySports app is fine. You can look at all your exercises, and edit them after the fact, and the presentation is reasonably attractive. 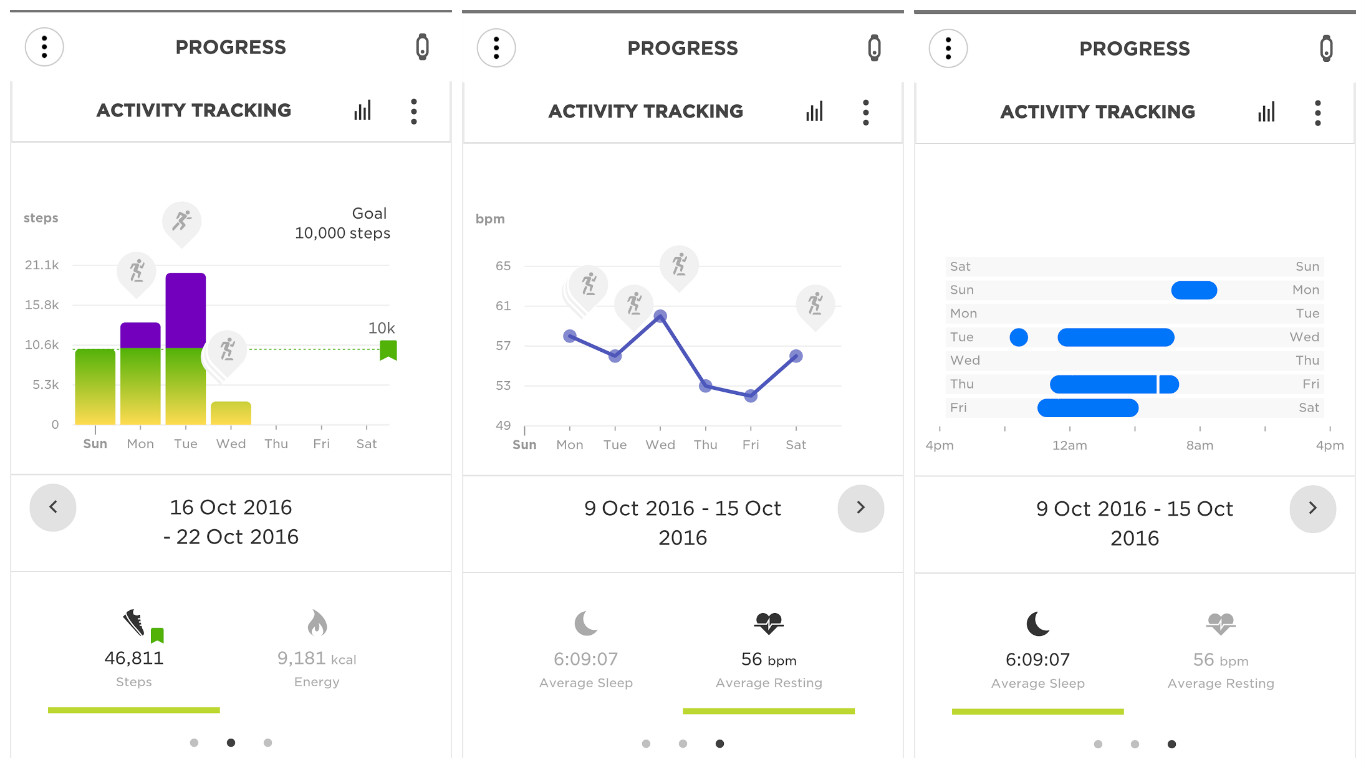 You can see your resting heart rate and the amount of sleep tracked in handy graphs should you wish, and the app will also tell you how your fat/muscle ratio has changed over the week, assuming you’ve taken the time to measure it. You can export your exercise data to the likes of Endomondo, Jawbone, MyFitnessPal, Runkeeper and Strava, all of which is good.

There’s also the option to set yourself goals, which is important, but it feels lacking without the social options provided by Fitbit and its ilk. With nobody aware of how much or how little you’ve walked, any sense of competition is non-existent.

Reading back over this review, I wonder if I’m being too harsh, assuming I must have missed something. And yet, repeated attempts to get to the bottom of seemingly obvious omissions confirm that, yep, they just aren’t there.

The battery life is disappointing, the controls clunky and as a fitness tracker it provides less than the bare minimum of statistics, certainly for runners or cyclists. Compared with something like the equally priced Fitbit Charge 2 or the Jawbone UP3, it’s simply no contest.

This is all the more baffling as the last TomTom fitness tracker we looked at – the TomTom Spark Cardio + Music – was very nice indeed. The TomTom Touch, however, isn’t in the same class.

How to Add Steps Manually on a FitBit

How To Change your Move Goal on an Apple Watch

How to Change the Time on a FitBit