Update: Google Glass 2 to be called Google Enterprise, and will feature an upgraded processor, prism and external battery pack.

By sifting through the most recent list of devices to pass through (FCC), sharp eyes over at Droid Life have spotted what may be the first signs of a new version of Google Glass.

A gadget with the catchy name A4R-GG1 stood out from the rest of the anonymous electronic devices being tested by the FCC, which gauges whether or not new products are safe to be used by humans.

The GG1 isn’t classified as a smartphone or tablet, but has 802.11abgn/ac dual-band Wi-Fi in 2.4GHz and 5GHz, Bluetooth LE, and a built-in rechargeable battery, suggesting it’s intended to be portable. 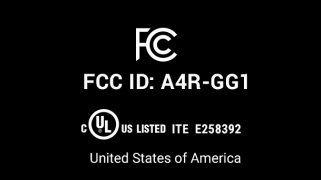 The most telling sign comes from the GG1’s e-label (above), which is formatted in the same aspect ratio as Google Glass’ display. The FCC’s “Label & Location” document states that to access the e-label you’ll need to “navigate to the settings menu” then “scroll left and right to view device e-labels”. That sounds a lot like the scrolling directions used in the previous Google Glass.

Then there’s the fact it’s called GG1, which isn’t exactly the hardest code to crack.

While none of this guarantees we’ll see a revamped version of Glass any time soon, the hints come in the wake of comments by Google’s executive chairman, Eric Schmidt, in March that Google Glass remains “a big and very fundamental platform”.

The Google Explorer programme was shut down in January, leading to reports that Google was abandoning Google Glass. Schmidt told The Wall Street Journal that the project had not been cancelled and that it had been put under the care of Tony Fadell, head of Google’s Nest connected home division, “to make it ready for users”.

Google Glass 2 could let wearers take pictures with their hands

New patents revealed today also suggest what Google has in store for the next version of Google Glass. Patents filed by the company point to a new type of picture-taking system that uses the wearer’s hands.

The patent reads: “Embodiments described herein may help a computing device, such as a head mountable device (HMD), to capture and process images in response to a user placing their hands in, and then withdrawing their hands from, a frame formation.”

It continues: “For example, a HMD may analyse image data from a point-of-view camera on the HMD, and detect when a wearer holds their hands in front of their face frame a subject in the wearer’s field of view. Further the HMD may detect when the wearer withdraws their hands from such a frame formation and responsively captures an image.”

In this way, Google Glass 2 users could use gestures to crop and frame their images. What’s more, Google isn’t limiting the functionality to just a simple picture frame; the patent goes on to show a number of other possible gestures. Using the side of your hands in a squeezing motion could indicate your desire to take portrait pictures, while using an “okay” sign with your index finger and thumb could tell Google Glass to take a smaller, more focused picture.

If Google introduce the new functionality to Google Glass 2, the benefits would be twofold. As well as making picture-taking a more seamless, intuitive process, it would also respond to the privacy fears many have about the original Google Glass.

The Google Glass 2 project is currently under the supervision of Nest co-founder Tony Fadell, and new details have emerged about its codename. Rumours suggest that Google employees are referring to the new Glass as “Google Enterprise”, and that the new device will feature a range of improvements over the current Glass.

According to 9to5Google, Google Glass 2 will come with moderate improvements to battery life, but will also give users the option to use a forthcoming external battery pack.

How to Fix “No Camera Found” on Google Meet

How to Split Screen on Discord

How to Record the Screen in Windows 11