Smartphone cameras have been really moving on of late, and LG appears to be keeping pace here, upping the resolution to 16 megapixels from the G3’s 13 megapixels, and the aperture to f/1.8, outdoing the f/1.9 aperture on the Samsung Galaxy S6’s rear camera in the process.

What this boils down to is that there’s more light hitting the sensor. More light means you can use faster shutter speeds and/or lower ISO sensitivity settings. And this means sharper pictures that are lower in noise.

LG doesn’t stop there, though. It has also improved the optical image-stabilisation (OIS) system as well, adding “Z-axis feedback” this time around. The laser-assisted autofocus from the G3 also remains in place, helping the camera produce sharp photos quickly, not to mention a new “colour-spectrum sensor”, which is used to set white balance and flash temperature correctly.

With near-identical core specifications to the Samsung Galaxy S6 and S6 edge’s camera (16-megapixel, f/1.9, 1/2.6in sensor, OIS, phase-detect autofocus), the G4 ought to deliver a decent-quality snap, and that it certainly does. In daylight, photos are crisp and well exposed – the autofocus system really helps when shooting from the hip, and in terms of general quality, it’s a match of the Samsung phone.

In low light the G4’s camera beats the S6’s in some respects, delivering a sharper, less noisy image, but in testing the LG didn’t always choose the correct white balance. Under fluorescent strip lights, for instance, white and light grey shades were tinged with yellow. So much for the colour spectrum sensor.

If you use the phone’s impressive manual mode, however, and set the G4 to shoot in raw (DNG format) and JPEG, you’ll be able to rescue those images, as well as maintain fine control over shutter speed, white balance, ISO sensitivity, exposure compensation and focus. There’s even an auto-exposure lock facility so you can make sure the settings don’t change from one shot to the next. It’s just a pity that LG doesn’t extend this level of control to video capture, which remains automatic-only. 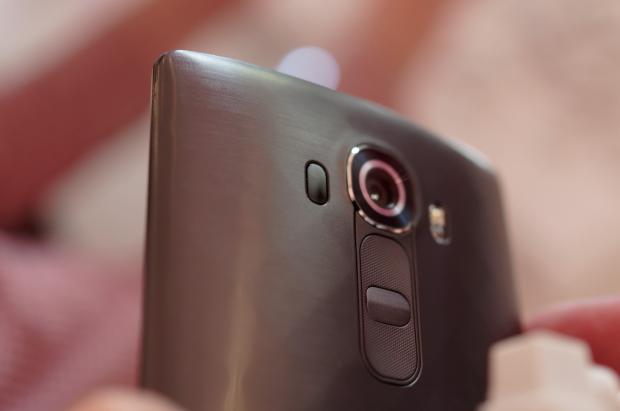 The front camera, as is the current trend, is now a high-resolution, 8-megapixel unit, and there’s a host of enhancements to the camera software. You can now double-tap the volume-down button when the phone is in standby to launch the camera and take an instant shot.

There’s also a rather gimmicky – and fairly pointless – “gesture interval shot” selfie mode that, simply put, lets you take a sequence of shots two seconds apart by opening your hand and clenching your fist in front of the camera a couple of times.

Naturally, there’s also the usual raft of improvements to LG’s UI overlay. The biggest is the new Smart Bulletin service that, with a swipe left from the homescreen, brings up a card-based view presenting notifications from a small handful of preselected apps, such as LG’s Health app, the calendar, the QRemote app and a few others. You can customise the view by dragging elements around and switching the various services on and off, but turning it off is probably the best thing to do with this.

LG has also upgraded the gallery app. It now has a feature called “Memories”, which organises photos and videos into event-driven albums – a bit like Google Photos does with its Stories feature, only offline. Of potentially more use is the “Timeline” feature, which allows you to view all the pictures you’ve taken in a given day, month or year, presenting a stream of tiny thumbnails in one or several large blocks.

LG’s smart suggestion system has also been improved with the ability to learn from your “lifestyle and usage patterns”, but I’m still not convinced by it. It seems to mainly present weather-based advice, such as “It will rain today starting in the afternoon. Gusty Winds. Be careful on the road.” This particular gem was delivered on a day when I’d travelled by train to work.

Elsewhere, owners of newish Volkswagens will appreciate the addition of support for its MirrorLink entertainment and navigation system; Google’s Docs, Sheets and Slides apps come preinstalled; and you also get 100GB of Google Drive space, free for two years, when you first sign in to the service using the LG G4.

At the end of 2015, LG began rolling out its update to Android 6.0 Marshmallow in Europe – so keep an eye out if you don’t have it already. It should be arriving in an over the air update very soon.It’s an update that doesn’t change much from a visual perspective – LG’s Android skin looks much the same as it did when the phone first launched – but it does add a bunch of new features that should make living with the phone easier. I’ve listed these below:

This is an update that doesn’t change much from a visual perspective – LG’s Android skin looks much the same as it did when the phone first launched – but it does add a bunch of new features that should make living with the phone easier. I’ve listed these below:

We’re not bowled over by the software improvements, but that doesn’t dampen my enthusiasm for the LG G4. It’s incredibly hard to be different in the smartphone world, and yet by being bold, LG has managed to pull it off.

Critically, it hasn’t compromised on performance, battery life or camera quality, and by retaining both a microSD slot and a removable battery, the G4 will appeal to a whole tranche of customers to whom flexibility is most important.

Contract prices aren’t cheap right now. You’ll be paying at least £35 per month for a free phone on contract, which is around the same as you’ll pay for an S6. However, reasonable SIM-free prices – starting at £500 for the plastic-backed edition, ramping up to around £520 for the leather one – suggest that, eventually, contract prices will wind up a notch or two below Samsung’s flagship.

So, while the Samsung Galaxy S6 remains the price-no-object smartphone of choice, the LG G4 is best option for everyone else. It’s a highly impressive smartphone, and one that – refreshingly – does things a little differently.

How To Insert a Checkbox Into Microsoft Word

How to Link to a Specific Timestamp in a YouTube Video