Yes, we Kanban: Using tech thinking to organise your kids

Storm Fagan has worked with household names such as Orange, Samsung and Skoda, and introduced lean and agile working processes to teams in the UK and across the globe. Here, Storm explains how she harnessed those skills to address her greatest challenge yet – organising her children.

I have two little kids. They’re old enough to run around, shout, make a mess, break stuff and say inappropriate things to old ladies we meet in the street, but young enough that they can’t read or write. They’re feisty and opinionated. I want them to get a sense of independence and to feel like they have some control over their own destiny. And this is what gave me the inspiration to create a summer holiday Kanban board.

READ NEXT: What is Kanban?“What do you want to do this summer?” I asked them on the first day. They had many ideas. I thought about writing a list so I wouldn’t forget all the things they wanted to do. There was only one problem: they can’t read or write, so it would have only been a list for me. They are at the age where they can’t remember what happened last week, so a written list wouldn’t give them any sense of whether we were doing the things they wanted or not. 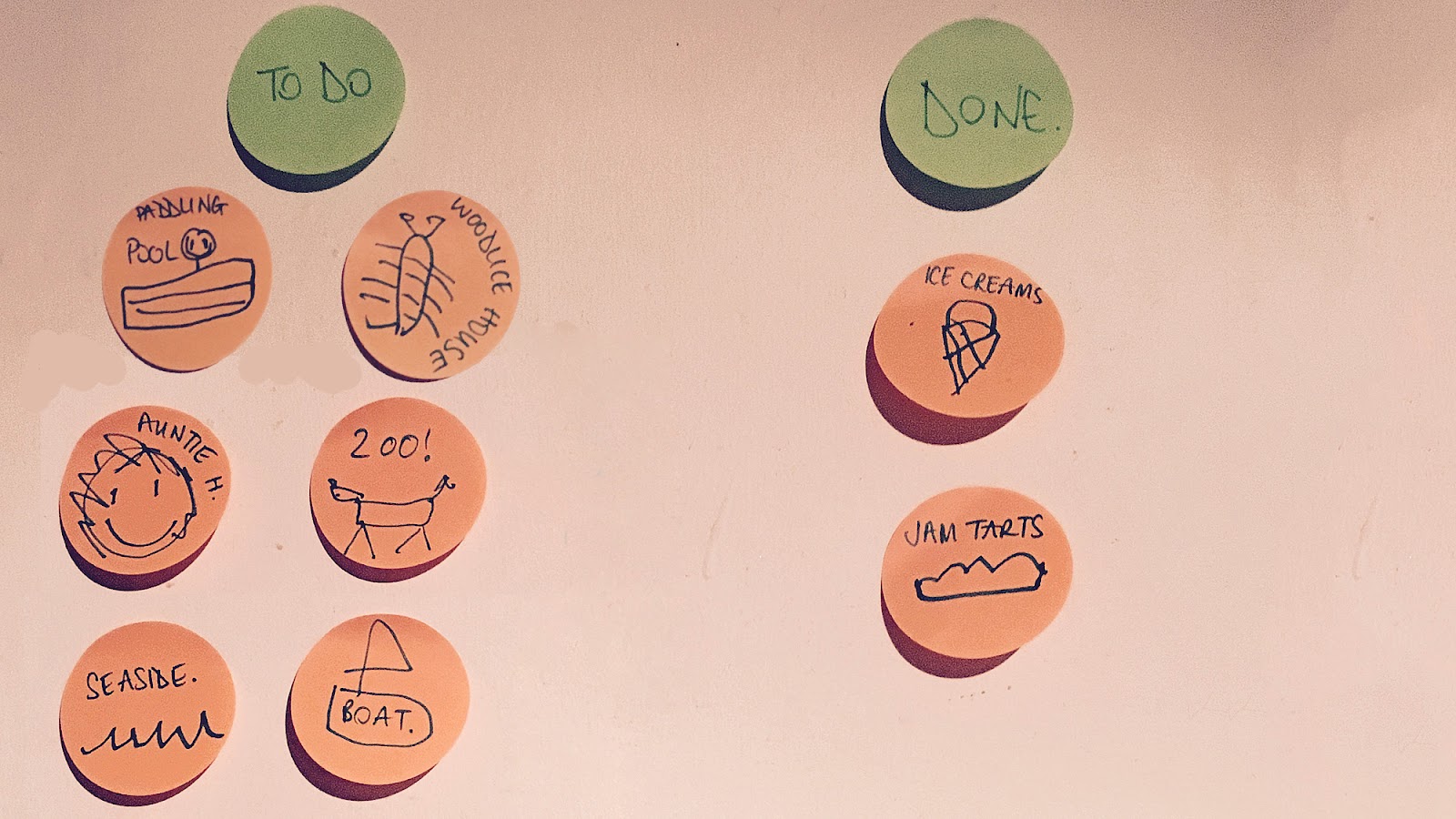 “Normally, a Kanban board has three columns – to do, in progress and done. I just put up to do and done”

Instead, I decided to set up a simplified Kanban board on the living room wall. Normally, a Kanban board has three columns – to do, in progress and done. I just put up to do and done. Then they went wild with the Post-it notes, drawing pictures of all the things they wanted to do. One picture to each Post-it note, a single word beneath to remind us what the picture was, just in case it wasn’t quite clear enough. What made it onto the list? Eating ice creams in the paddling pool, making jam tarts, going on a boat, going to the zoo, visiting their auntie on the other side of the country and making a house for woodlice. All the fun stuff, basically.

Then we stuck the Post-it notes up on the wall in the “to do” column. We had a chat about what their priorities were (ice creams and jam tarts, obviously) and moved those notes to the top of the list so we knew we should try to do them first. There was a good mix of free things we could do in the house or garden, and a few things that would involve spending money, but we didn’t cover every single day – there were plenty of days spent at the supermarket or the dentist.

At the end of a day where we had done one of the things from the list, one of the kids would ceremoniously move the corresponding Post-it across to the “done” column. They loved it. They felt as though they had some influence over what we did – they could see progress. They were excited about the things that were left to do and we talked about which ones should now go to the top of the list.

On the last night of the summer holidays, we sat together on the sofa. While eating our last ice creams of freedom, we looked at the wall and realised we’d done almost everything. We talked about how awesome that was and how much fun we’d had. It really didn’t matter that we hadn’t done everything, because we’d managed to fit so much of the other stuff in. It dawned on me: I was inadvertently doing an agile retrospective with my kids – something I’d normally do in the office. In the home, however, each Post-it note represented a fun memory, and made that memory solid and real for both me and the kids – and it was great.

“The kids, young as they are, understand that their opinions matter”

We don’t use the Kanban board every day, but we do use this approach some weekends. Yes, it’s utopian, and no, it doesn’t happen every weekend – but when it does, it’s glorious. It’s collaborative in the best sense. The kids, young as they are, understand that their opinions matter and, consequently, they are learning how to put a good argument together. Whereas at work I might demand data as evidence for prioritising a piece of work, at home it’s more about justifying why jumping in puddles is better than going to the zoo. If you can make the case, whatever your age, then your card gets to the top of the list. It’s simple, and rewarding.

In the office, it’s this process of prioritisation and decision-making that is at the heart of agile working. But to be truly agile, you need a backlog of items to pick from so that there’s always something you can start doing – and this is where the technology angle comes in. My kids are little – far too little to get to grips with Trello, or any text based agile tool for that matter – so we use Pinterest. We have a private board called “family backlog” and whenever we chat about something we might like to do, I pin it to the board. Sometimes this is done together sharing the screen and looking at the pictures – which version of the homemade rainbow shaving foam do we think looks the most fun? Once we’ve decided, we pin it to remember for the future. Sometimes, if one of the kids mentions something good when we’re out and about, I whip out my phone and quickly pin it.

Then, when we have our free weekend approaching, we look at the Pinterest board together. It has big pictures, which is easy for the kids to understand and remember why that item is there. It usually has links through to instructions which is handy for the average, non-amazing parent (me). We’ve done all sorts: we’ve made the rainbow shaving foam, we’ve collected some caterpillars to hatch butterflies and you’d be amazed at how many things you can do with paper plates. This is not the only use of agile methodology in our house. We don’t apply agile practices to everything because that would be excessive, but we do use it for trying to organise ourselves around parties, Christmas, housework and homework. When agile works, it feels like the natural, obvious way of doing something and you feel like a super-organised hero. And anyway, jam tarts are always a bonus.

How to Curve Text in Google Docs

How to Sync Google Calendar with Outlook

How to Convert Rows to Columns in Google Sheets