Samsung is looking into the possibility of developing a dual-OS smartphone–laptop hybrid for Android phones and tablets. The Korean tech company filed a patent last week, first spotted by Patent Mobile, which describes a laptop-shaped station with a sizeable dock for Android tablets and smartphones such as the Galaxy Note phablet.

Acting as the brains of the hybrid, the smartphone will run Android OS when used on its own but will switch to Windows OS when connected to the dock. The smartphone screen will be used as a touchpad for the laptop, and in return the laptop will charge the smartphone while it’s docked.

The proposed set-up will also enable the laptop to access the internet through the Android device, doing away with the need to connect to Wi-Fi or use a mobile internet key. 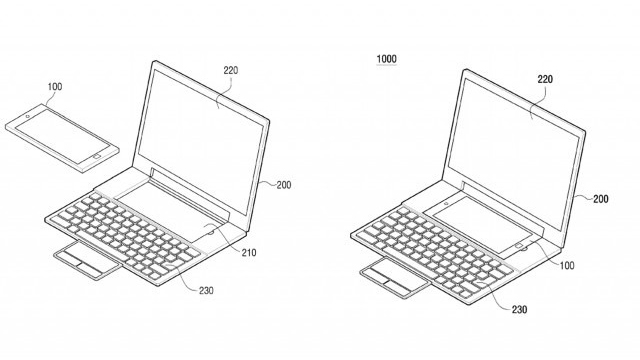 Dual-OS devices are nothing new, and they have a track record for not being particularly popular. Last year Asus was forced to drop the dual-OS Transformer Book Duet TD300 due to opposition from both Google and Microsoft. And yet interestingly, Samsung’s patent reverberates with a number of recent developments at Microsoft.

First, it chimes with the Windows 10 Continuum concept, which allows Windows smartphones to be connected to an HDMI display, plus a mouse and keyboard, and be used as a normal PC in conjunction with Windows 10’s Universal apps.

Second, it makes sense that Microsoft would want to challenge the MobileFirst integration between Apple and its enterprise partner IBM with a similar collaboration – especially with a company that’s recently agreed to preload Microsoft’s apps into its Android tablets.

Third, Microsoft has been pushing big for integration with non-Windows devices. For example, it was revealed yesterday that there would be Cortana apps for Android and iPhone to work as a companion to Cortana on Windows 10. Windows 10 is also set to feature a Phone Companion app that will enable users to sync files and content to their PC with Windows, Android and Apple phones.

Ultimately, while this is only a patent, it will be interesting to see what becomes of it in the long run. If it is made, and is good to use, then it could be a compelling reason to use your mobile device as a transferable computing brain.

How to Wirelessly Transfer Files from PC to Android

How to Cancel Netflix: Stop Your Netflix Subscription on iPhone, iPad, Android, and Online