Swarm of spy drones can eavesdrop on enemy troops

Another day, another swarm of drones. US Navy scientists have revealed the newest addition to their arsenal – a disposable mini-drone, around the size of a small bird, that’s dropped en masse from the sky and acts like a gliding mobile phone.

The Cicada (Covert Autonomous Disposable Aircraft) drones are GPS-guided disposable air vehicles designed, much like their namesake, to live for a short period of time before dying, leaving only a husk behind.

“The idea was why can’t we make UAVs (unmanned aerial vehicles) that have the same sort of profile [as the Cicada insect],” Aaron Kahn of the Naval Research Laboratory told Agence France-Presse. “We will put so many out there, it will be impossible for the enemy to pick them all up.”

The drones, which don’t use motors and are built up of only 10 parts, have the potential to be used in both civil and military scenarios. They can glide silently at a speed of 46mph, and are programmed to follow GPS co-ordinates. What’s more, in terms of military drones they are cheap to produce. The newest prototype cost the US military $1,000, but the aim is to get this cost down to $250 per drone. 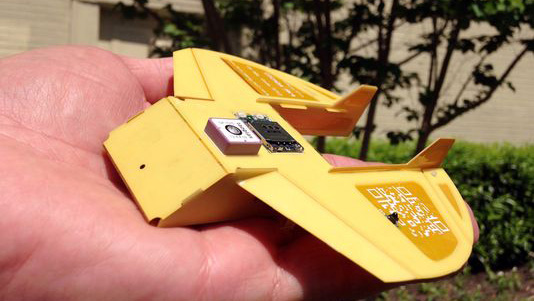 One of the more innocuous uses for the Cicada would be to monitor weather conditions, with sensors that can pick up local humidity and air pressure. Espionage looks to be another popular application – attach microphones to the Cicadas and drop them on an enemy base and you have a swarm of silent spies. Other reported uses include equipping the Cicadas with instruments to detect chemical weapons or monitor enemy road activity.

Concept art for the Cicada was released in 2006, at which point it looked like a low-res enemy from a forgotten SNES game. In 2011, a prototype of the Cicada drone was tested in Arizona. The prototypes were released from 57,600ft (17,500 metres) and flew 11 miles, landing within 15ft of their target.

Since being put on display this week as part of the Pentagon’s “lab day”, the covert drone has reportedly been the focus of a great deal of attention. “Everyone is interested. Everybody!” Daniel Edwards, an aerospace engineer at the Naval Research Laboratory, told Agence France-Presse.

As is becoming increasingly common in the discourse surrounding new drone technology, the ethical implications of surveillance need to be weighed up against the potential benefits offered to situations such as disaster relief and rescue operations. While the Cicada drone is clearly pitched at military use, the overspill into civil use will be something worth keeping an eye on.

How to Turn On Amazon Photos Autosave Option