The BBC has announced delays to the rollout of the Micro Bit computer, originally intended to be given to one million schoolchildren across the UK in October.

According to a BBC spokesperson, the miniature computer will now be sent out “early in the new year”, due to an issue with its power supply that had “affected a small number of devices”.

“As a result of our rigorous testing process, we’ve decided to make some minor revisions to the device – getting it right for children and teachers before we manufacture one million units is our priority,” said the spokesperson.

The BBC Micro Bit is a little more simple than the Raspberry Pi, but includes a motion detector, magnetometer and Bluetooth for connecting to the internet or other devices. There are also two programmable buttons, 25 red LEDs, and five I/O rings that let you connect to other devices or sensors using crocodile clips. Pretty much everything on the device can be programmed.

The BBC Micro Bit project started in 2012, and was initially developed by the BBC R&D team. As part of what the BBC describes as its “most ambitious education initiative for 30 years”, up to one million devices will be given to year 7 children across the UK for free.

“Channelling the spirit of the Micro for the digital age, the BBC micro:bit will inspire a new generation in a defining moment for digital creativity here in the UK,” said Tony Hall, director-general of the BBC, today in London.

“This has the power to be transformative for the UK,” he added. “The BBC is one of the few organisations in the world that could convene something on this scale, with such an unprecedented partnership at its core.”

ARM has worked closely with the BBC to provide the mbed hardware plus the software development kit (SDK) and compiler. ARM CEO Simon Segars said: “The BBC and Acorn Computers, where ARM technology was first created, came together 35 years ago to develop the BBC Micro and that inspired the engineers now at the forefront of shaping our increasingly connected world. The new BBC micro:bit has even greater potential because it can inspire boys and girls toward a career in technology at a time of unprecedented demand for science and engineering skills across all areas of the global economy.”

Other partners include Samsung, which developed the Android app for the BBC Micro Bit; Microsoft, which developed web-based programming tools; and Nordic Semiconductor, which supplied the main processor.

When it was announced, the Micro Bit received a warm reception online. Programmer Hazel McKendrick, a coder working on the anticipated game No Man’s Sky, praised the device on Twitter. 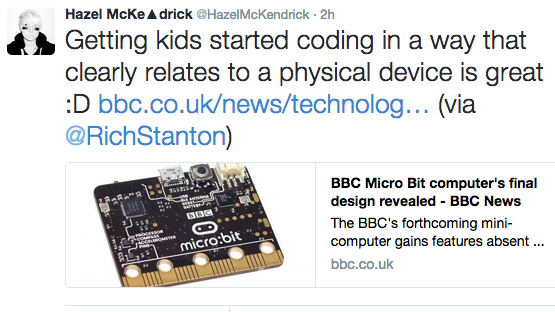 The BBC’s senior technologist Michael Sparks has written an interesting blog post on the development behind prototyping the Micro Bit, including a little more information on the programming languages.

“The reason we chose Python as a language for programming the device was due to its popularity in teaching, not convenience,” wrote Sparks. “As a result, the hardest part of the system to create was a specialised Python-to-C++ compiler for the system.”

The Micro Bit can connect to a number of other devices and kits, including Kano, littleBits and Raspberry Pi. This connectivity promises to offer a great deal of flexibility to young coders.

“The BBC Micro Bit is all about young people learning to express themselves digitally,” said Sinead Rocks, the head of BBC Learning. “As the Micro Bit is able to connect to everything from mobile phones to plant pots and Raspberry Pis, this could be for the Internet of Things what the BBC Micro was to the British gaming industry.”