Disney’s new robot can move like a physics-defying cartoon

You’re seven years old. You’ve gone to Disneyland. You run up to hug Mickey Mouse, his mouth open wide and you stare into the unremitting darkness between his jaws. Once you may have met the gaze of a low-paid human sweating beneath the costume. Now you see only a cold, unfeeling machine.

At least, that’s if researchers at Disney Research manage to develop a bipedal robot able to walk like physics-defying cartoon characters.

“Creating robots that embody animation characters in the real world is highly demanded in the entertainment industry, because such robots would allow people to physically interact with characters that they have only seen in films or TV,” researchers said in a paper presented at the IEEE International Conference on Robotics and Automation.

“To give a feeling of life to those robots, it is important to mimic not only the appearance but also the motion styles of the characters.” 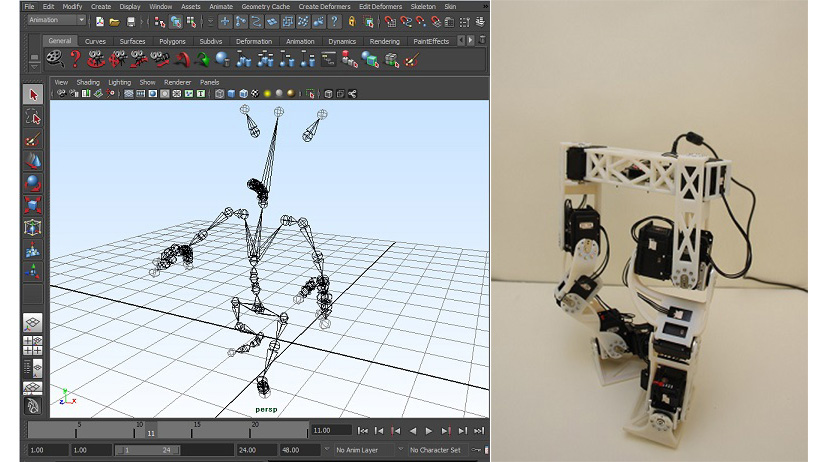 It turns out that some cartoons walk in such ridiculous ways that translating these movements to the real world generally results in them falling over like adorable drunks. To solve this, the team at Disney Research, Pittsburgh, and Carnegie Mellon University have been working on a robot with a skeleton that can compensate for the bow-legged posture of cartoons.

As you can see from the video, the team of researchers have come up with a prototype of a fat peanut man that, although it manages to stay upright, looks a little shaky on its feet. One of the main issues is the angle area of the robot, which needs 3D-printed links and more servo motors than could feasibly fit into the body.

The scientists are confident they can improve upon the prototype, and aim to follow up their work on the lower body by replicating cartoon movements in the upper body of the robot. There’s no mention of eventual uses for the cartoon robots, although a robot-filled Disneyland is surely on the cards.

And we all know from The Simpsons how that ends up…

How to Put an Image Behind Text in Google Docs