How VR is helping the victims of terrorism

Nicole Kobie ContributorOne of the best technology journalists in the UK, Nicole is known for getting behind the headlines to uncover the truth of what’s really going on. If there’s a story, she’ll find it. Read more May 27, 2016

Researchers are carefully building virtual-reality versions of the Bataclan theatre and Paris streets to simulate the horrific attacks of last November. It’s not for some sick game, but to help victims suffering from post-traumatic stress syndrome (PTSD).

Strictly speaking, this isn’t anything new. VR has been used to treat PTSD for more than a decade, the improvement and commercialisation of VR headsets of late has certainly helped, says Dr Albert “Skip” Rizzo, the director of medical virtual reality at the Institute for Creative Technologies at the University of Southern California. Despite the hardware not quite being ready at every point, research quietly continued from the mid-1990s. “The tech wasn’t very good, but some researchers kept with it,” he says. “That means there’s good scientific research into the use of VR to address mental-health issues, even if the technology hasn’t been widely available until this year.

“We’re well poised now to take advantage of the consumer products and offerings that are 100 times better than some of the crap we had to work with ten or 15 years ago,” he says. 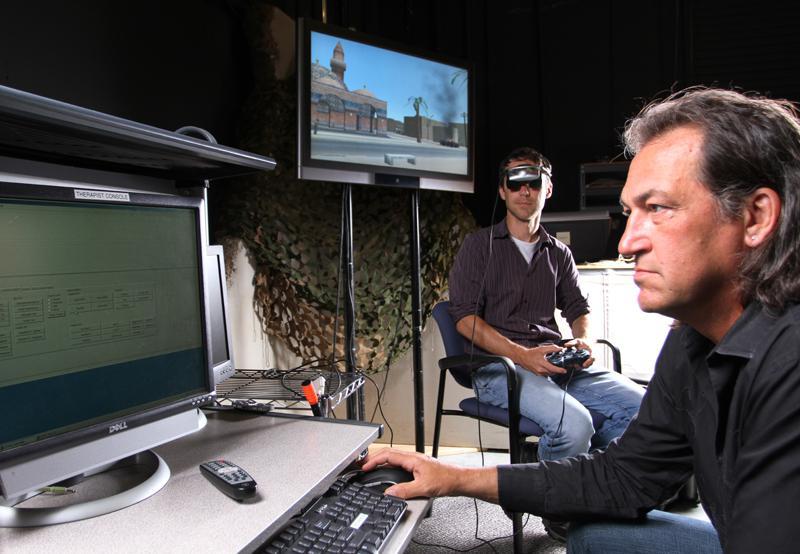 VR headsets are being used to treat a variety of psychological issues: to help people with autism train for stressful social situations, such as job interviews; to overcome phobias; and to reduce pain, particularly in people with severe burns, by distraction.

Rizzo’s work, however, focuses on overcoming post-traumatic stress syndrome (PTSD), particularly in American soldiers. His VR-based system is essentially a digital addition to a treatment called prolonged exposure, in which sufferers of PTSD relive their trauma over and over again via their imagination, talking through what happened with a therapist to help process it.

“The active ingredient in this traditional treatment is that the graduated exposure in imagination to the trauma helps the patient to confront and process difficult emotional memories that they’ve typically been avoiding and not dealing with,” he explains. “We follow the exact same protocol: the same number of sessions, the same process, the same procedures, except the patient is wearing a head-mounted display and the clinician is setting up a virtual environment based on their trauma memory.”

Patients tell the story of their trauma step by step, adding in details every time. “And the person may say: I was driving towards Fallujah, and I had a funny feeling in my gut, and I saw someone run from some bushes, and I realised [what it was], but it was too late and we hit an IED and the vehicle blew up,” he explains. “The clinician can create all those things [in the virtual world]; a character running off, the IED going off, sound effects of people screaming can be brought into the mix.”

The VR essentially adds a layer to the prolonged exposure treatment in order to amplify it, and Dr Rizzo says it’s as effective – if not more so. “In some cases, we’ve shown better outcomes,” he says. “We’ve had some patients who have tried the traditional, imagination-only prolonged exposure [approach] with no benefit and come into our programme and shown benefits,” he says.

So far, Dr Rizzo’s work has focused on soldiers, but it’s set to shift to civilians, including victims of sexual assault, car accidents, extreme weather – such as having your house blown away by a tornado, he says – or terror attacks. VR was used successfully to help treat PTSD in victims of the New York World Trade Center attacks in 2001, and now Dr Rizzo is working with a consortium of European collaborators to build a virtual Paris scenario. 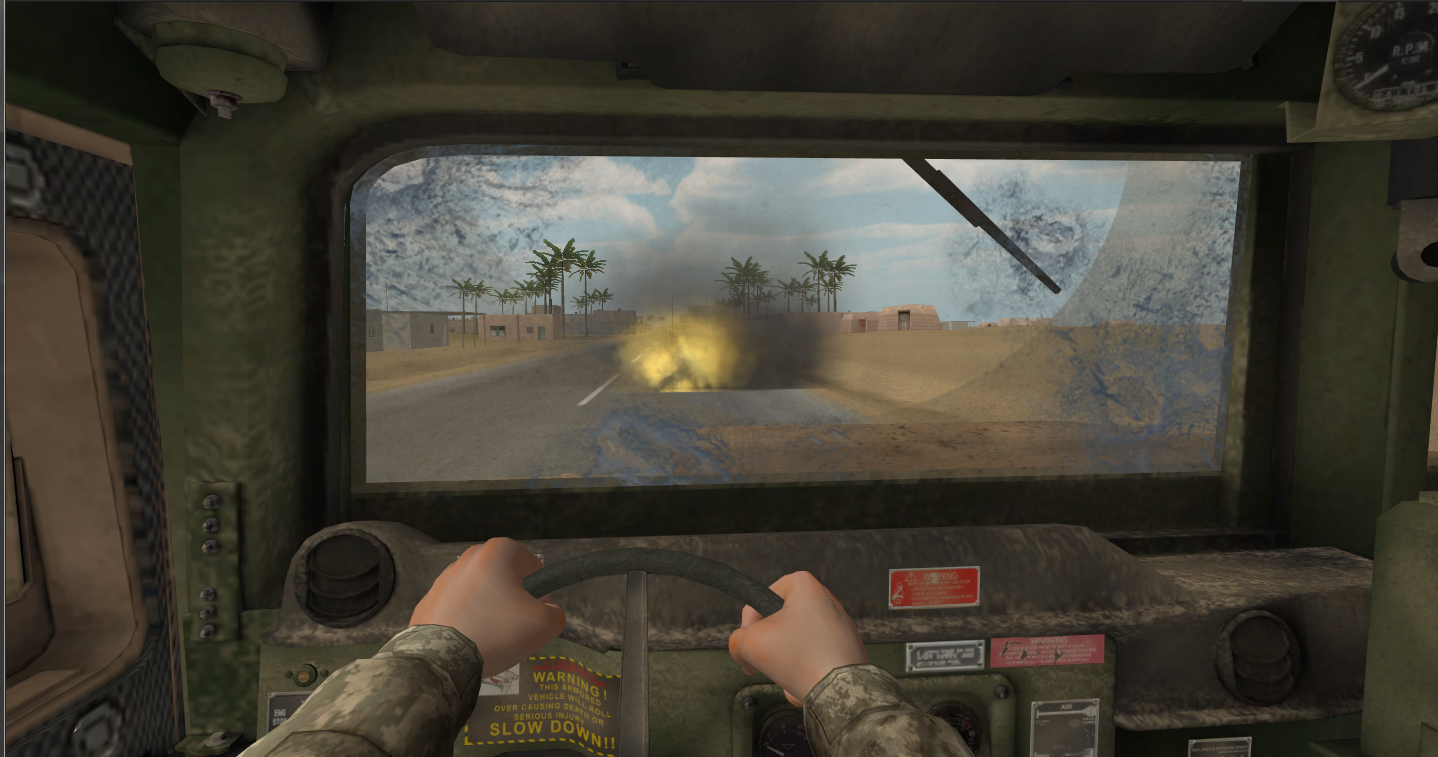 It’s slow work, says Professor Simon Richir of the Institut Arts et Métiers Laval. “We have to reproduce in 3D the places where the attacks occurred and insert avatars of people – dead, alive, injured – and add 3D sound,” he says. The work is done in Autodesk’s 3ds Max and Character Generator software, and the virtual world is powered by the Unity engine and Dr Rizzo’s own Bravemind platform.

“The 3D scene needs to encapsulate a myriad of cues capable of eliciting the traumatic memories. Accessing the trauma is essential for the therapy’s success”

Professor Pedro Gamito from Universidade Lusófona in Portugal is also working on the project. “We need to create an environment that is meaningful for the patients,” he adds. “This means that the 3D scene needs to encapsulate myriad cues capable of eliciting the traumatic memories. Accessing the traumatic cues is essential for the therapy’s success.”

The development phase will take time “due to the number of scenarios needed to be developed”, Gamito says, but he hopes testing will start in the next few months.

Richir adds that the project needs funding for developers – and may consider crowdfunding. “We also need Paris therapists to work with us to validate the system and to test it with their patients,” he says.

If it all comes together, it will mean victims of the Paris attacks who suffer PTSD could find themselves in a digital Bataclan watching Eagles of Death Metal perform – and see the attackers step on stage and start shooting. “You’re probably thinking: ‘Jesus Christ, why would anybody do this?’” Dr Rizzo says. “Admittedly, it’s hard medicine for a hard problem. But when people say: ‘Why do you do this, why do you torture people like this?’, I say it’s because we know it works. The science and research – it’s not 100%, but it’s one of the best treatments in clinical trials.”

Dr Rizzo is aware that’s a bold claim. “I’m cautious,” he stresses. “I’m a scientist and an ethical clinical psychologist. I don’t want to oversell what we’re doing.”

See related
Virtual reality will change the way you think about violence
Immersive journalism: The future of reporting or an ethical minefield?

That said, he believes VR may appeal to younger generations who are used to video games and intrigued by virtual-reality headsets. “They may look at VR and say it’s kind of cool… maybe I’ll try that rather than go in and talk to a shrink,” he says. “Well, lo and behold, when they get there they find out they’re actually going to be talking to a shrink. This is not an automated treatment… but we find that people are still very engaged because the VR is novel and… [this is a] disorder where avoidance is one of the cardinal symptoms.”

In other words, even if all VR does is get sufferers through the door, it’s already helped.

While there’s not yet a crowdfunding site set up for the terror attacks work, you can support Dr Rizzo’s efforts to develop virtual worlds for Vietnam veterans suffering PTSD here.

READ NEXT: Imagine being able to see through the eyes of news reporters live and direct from events happening thousands of miles away

How to Put an Image Behind Text in Google Docs